Well, Riley is short two tonsils & some adenoids now. But he gained two tubes in his ears. His procedure was this morning at 10:00, and we are now hanging out in his room. His tonsils were HUGEMONGOUS and he has sleep apnea, so we'll be staying overnight.

So far, he is taking this like a champ! He's been munching all day and so far he's had two slushees, most of a PB&J, some trail mix, apple juice, a little macaroni & cheese, a couple of chocolate covered pretzels, and some of his dad's chips. He's now scarfing down some pudding and fruit (with a couple more chocolate pretzels). He has watched Batman Begins and an entire DVD of vintage Tom & Jerry cartoons, and he's now watching Scooby Doo. Oh, and he took a nice, long nap earlier.

He wants his IV out and wants to go home now; his throat is a little sore; and his voice sounds funny. But he's doing really well.

I have to say a HUGE thank you to all of our family and friends, both near and far. All day I've received phone calls, tweets and Facebook comments expressing support and love, and telling us that the people we love have been praying for us. Thank you all for your prayers.
We love you! 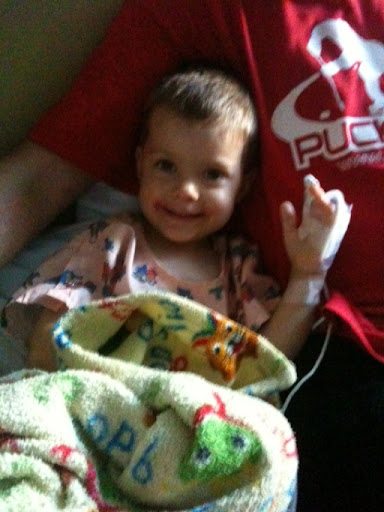