WFMW - How I Cook Bacon

Okay, let me start with a confession.

I cannot cook bacon in a skillet.

If the world was coming to an end and its very salvation depended on my ability to cook bacon (to an edible state) on a stove top, we'd all be in trouble.

But I LOVE BACON. I cannot think of any food that is not made better by the addition of bacon.

So I have learned to adapt. I nuke the bacon in the microwave.

I start by getting out the bacon, two dinner plates, two paper plates and a roll of paper towels.

I put one paper plate on the dinner plate, then add a paper towel (or two if it's thick-cut bacon) on top of that. 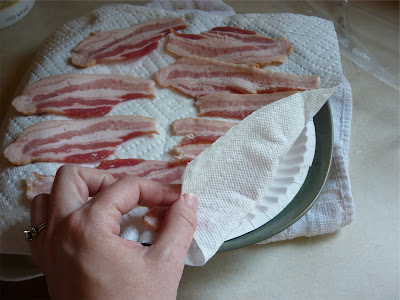 Then I put my bacon on top of the paper towel. Be sure it's in one layer. 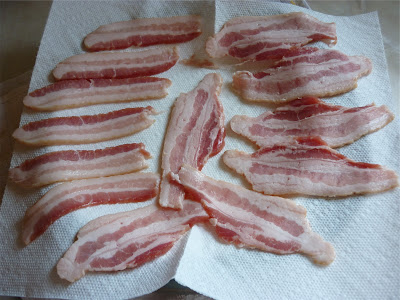 I was making BLT's for dinner this night, so I cut the bacon strips in half before I cooked them. When I make it for breakfast, I leave the strips long.

Then, I put another layer of paper towel(s), another paper plate and another dinner plate on top, and pop it into the microwave. 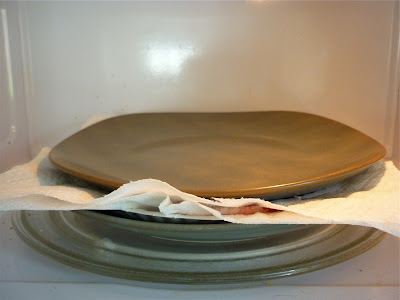 Cooking times vary, but in my microwave, I cook it on high for approximately 1 minute per whole strip of bacon. (I cooked this batch for 6 minutes.) Also, if you're doing more than one batch, you might need to decrease the cooking time a bit for subsequent batches... at least I have to.

When it's done, you'll need to take everything out of the microwave carefully. The whole thing will be extremely hot. I put it on a pot holder next to my sink. I remove the top dinner plate and set it aside, then I remove the top paper plate & paper towels and put them into the sink until they're cool enough to throw in the trash. 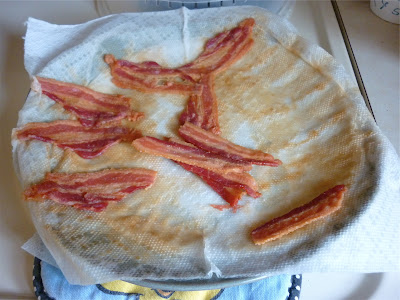 The bacon comes out really flat, which makes it perfect for BLT's. Oh, and see all that bacon grease on the paper towel there? I would rather have it there than on my sandwich.

So there you have it. That's how I cook bacon. I know that it's not exactly eco-friendly, with all the paper towels and paper plates, but this is what works for me!

For more Works for Me Wednesday tips, visit We Are That Family.
Posted by Keowdie at 10:00 PM