Weeds irritate me. I have a lot in my garden to be irritated about at the moment. I spend hours each week pulling, plucking (and occasionally cursing at... ahem) the weeds. If you've read this blog before, you might already know that last year when we expanded the garden, we bought top soil to fill it. We live on clay & rock, so the garden must be elevated a bit.

So, we bought the top soil. What the company delivered was local fill dirt. Disguised as "clean top soil." When it's dry it's hard as a rock. When it's wet it doesn't drain. And it came fully seeded with the stuff they use to make hay. Yay. Yay for hay? Notsomuch.

So, those weeds are pretty much the only thing that grows. And I spend lots of time fertilizing the stuff I want to grow, and exterminating the stuff I don't.

That said, occasionally a weed demonstrates such a strong will to live, that I have to leave it be. One in particular proved to be quite stubborn.

I picked it (but missed the root), and it grew back.

I poisoned it, and it grew a little tan-colored.

I yelled loudly at it, and I'm pretty sure it laughed at me.

I stepped on it, and it grew crooked.

Eventually, I was forced to be impressed with this little weed, and decided to respect its will to live.

So imagine my surprise when I came out the other day and found this on top of it: 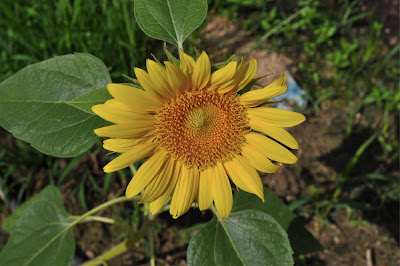 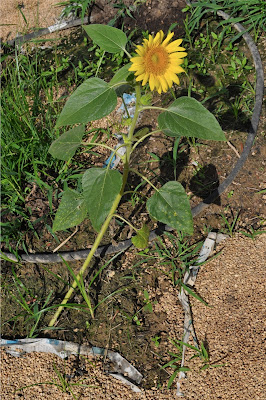 (And leaning...you know, from being stepped on a few weeks back.)

I think it must be some sort of rogue sunflower. 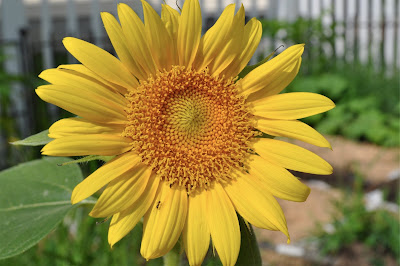 It has several more buds down the stem. Do you know what this is? 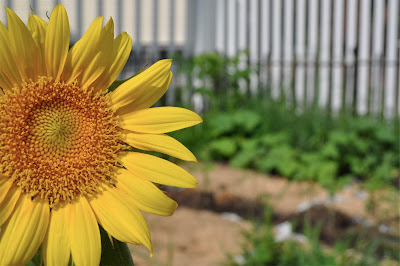 If you know what kind of weed flower this is, leave it in your comment.

I might be inclined to send a lovely surprise to anyone who helps me out...
Posted by Keowdie at 5:23 AM