Tonight we have a much-anticipated match-up!

In this corner, we have a complicated fella. He's sometimes unpredictable, he's often selfish, he's responsible for the original sin... It's... FREE WILL!!! 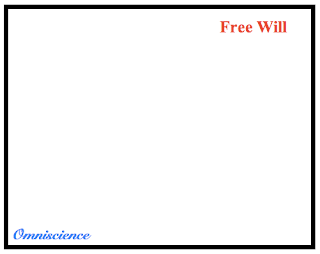 And in the far corner, we have the reigning champion. He's mysterious, he's confusing to tiny-brained humans everywhere, defending his title... it's Omniscience!!!

As I have been reading through the Bible in 90 Days, I have been reflecting on a serious conversation I had long ago. It was with someone who would probably describe themselves as an atheist... although don't understand how a person could be so angry at someone whom they don't even believe exists.

Anyway, this person was basically trying to talk me out of my faith. At the time I was still new to my faith (I still feel new to my faith - will I ever really feel like I have a handle on it?) and I wasn't really equipped to have these conversations. I did my best, and I think I did okay.

The topic of free will came up, and this person said:
"...but if your 'God' already knows everything that is ever going to happen, and everything you are ever going to do, then you don't really have free will, do you? You submit yourself to a God who tugs on your strings & makes you dance whenever & however He wants."

This made me think.

And the story goes that God made the enemies of Isreal oppress His people...

And it does say that an evil spirit from God came over Saul...

And, well, to that, I'm still not sure what to say. Other than God does give us feelings in our hearts. Isn't that how He calls us to various purposes? He puts a feeling, a pulling, yearning feeling in our hearts. And we can ignore it for a while, but He grows it & grows it until we have to pay attention. But even when we pay attention to it, we can still choose not to follow it. We can choose not to follow Him. Look at all the people out there who have heard the Gospel, but still choose to turn their backs on Him. That's free will, right there.

And as for this bit about His omniscience negating our free will? That's an easy one. Allow me to answer with an analogy.

My dad loves Coca Cola. Loves it. So I always keep a couple in my fridge, just for him (because we are not Coke drinkers in my house). Whenever he comes over, I usually say something like, "Dad, can I get you something to drink? I have tea, Coke, water and juice."

Now here's the thing: I am on record as being 100% accurate in predicting that my Dad will choose a Coke. In scientific terms, that practically makes it a law of nature.

The sun is hot.
The rain is wet.
My dad will choose Coke.

It's the same thing with God.

Just because He has amazing statistical accuracy with knowing everything that will ever, ever happen during the whole existence of all of time does not mean that I do not really get to exercise my free will. It just means that He won't be surprised by my choice (even if I sometimes surprise myself!).

So you see, my free will & God's omniscience are not in opposite corners. His Omniscience is not the opponent of free will. It's more like the TV camera that watches over the whole thing.

Satan is the real opponent of free will. Because he manipulates it & uses it against us every chance he gets.

Just ask Adam & Eve about that.