Knit-serverance Pays Off, I Hope...

I have been knitting the same "quick" project for what seems like for. ev. er.

It's a baby sweater for a friend. The baby was born a while ago and I am still knitting this sweater. In all fairness to the sweater, this particular version is not the first of it's kind here. This one is actually my third, third attempt.

The first time I cast on too many stitches. Okay, that was my fault for trying to cast on, watch TV, and prevent a cranky two-year-old from destroying the world as we know it  house, all at the same time.

The second time I cast on the right number of stitches, but I neglected to swatch. The dreadful thing was nearly 7 inches long before I realized that my gauge was horribly off, and that sweater would probably have fit a preschooler. I'm all for making baby knits that babies can grow into, but I like for that to happen before they start kindergarten.

I have finally finished the body... 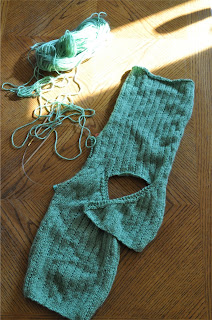 It's a little wonky, I know... but it is knit beginning at the bottom of the front side, up, over the shoulders, and down the back side.

And I picked up the stitches for the sleeve: 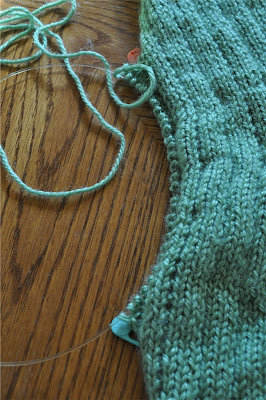 This was no easy task, since even though I swatched and got gauge, it lied as gauge swatches tend to do because they are pointless and evil my gauge is off anyway. This sweater is still too big, which made the measurements for the picking up of the sleeve stitches way off.

Argh! I did a little knitmath (ugh...) and I think it's going to work. Of course, it did involve math, so there is a chance that this sweater will only fit a baby that is shaped like a bowling ball with pencils for arms. Whether it does or does not, I will finish this stupid precious sweater soon. I need to get this thing off the needles. Need.

In my frustration, and with a road trip coming up this weekend, I might have caught a small case of startitis. There is a chance that I might have sort of cast on a pair of socks... 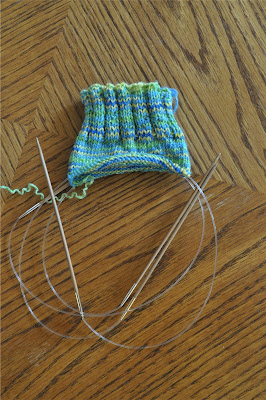 This was another risky move. This particular yarn has been started into four other pairs of socks, and has been ripped back each and every time. 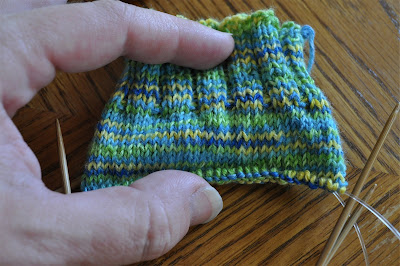 The colorway is lovely, but the changes come up so quickly that I'm having a hard time finding a pattern to compliment it. So, the four failed attempts were really due to my own pickiness. That, or this yarn is cursed.
Posted by Keowdie at 1:37 PM