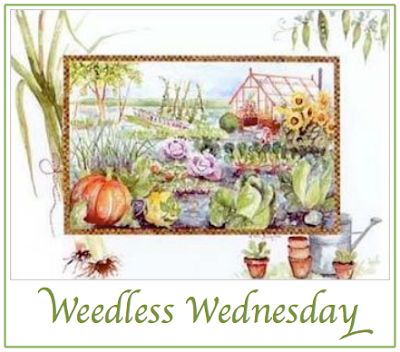 I had started everything inside, then moved it all outside. This is a practice I must learn to stop. Ever since we got the bad soil in the bigger garden, the little sprouts die within moments of being moved into the concrete clay that is my garden.

I replanted everything. From seeds.

So far, the only thing that is really thriving are the potatoes: 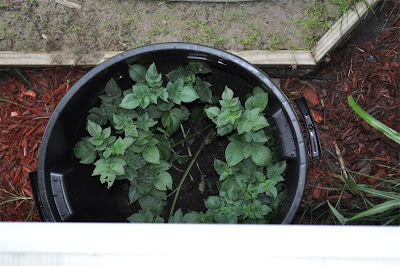 They're doing really well because they are in a garbage can with lots of good soil. In fact, they are growing so well that they grew above the top of the trash can before I knew it! I hope I didn't wait too long to throw some more dirt in on top of them. Supposedly, if I keep throwing in more & more soil, I will have a garbage can full of potatoes by the end of the season. Although at this rate, I'm thinking it might be full by the end of the month...


Another veggie that's growing pretty well is the corn. 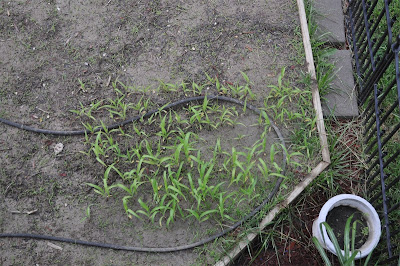 We planted ruby and sweet yellow. I put them in closer rows than last year in the hope that we'll get more actual corn.

I planted peas in pots again. In years past I have had them on the front porch, and out in the yard. In past years we've been lucky to get one or two pea pods before they got baked in the St. Louis heat. 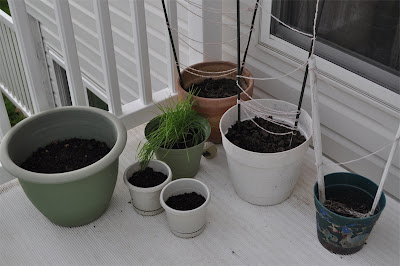 This year, they are on the deck, right next to the house. They'll get a bit of morning sun, but will spend the rest of the day in the shade. We also have chives, green onions, and the wheat grass Tyson planted at school in May. I like keeping the onions on the deck so that I can run out & pick what I need while cooking. 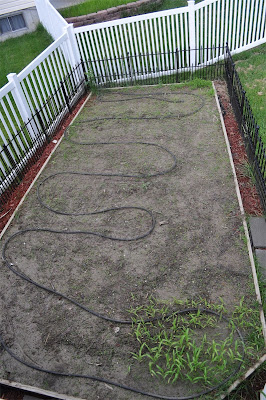 So far, the garden is looking pathetic overall. I took this photo before we had a bit of rain. It's much greener now, although most of the green are weeds. I have no idea where they got this soil, but it is infested with weeds. I mean, it's taking hours each week just to keep them at bay... right now it looks like a green carpet. Of weeds.

We did plant green beans, tomatoes, okra (only three plants this year), watermelons (in the front yard), bell peppers, lettuce and spinach. Everything but the lettuce & spinach have come up so far.

What about you? Do you have a vegetable garden? An herb garden? Advice on controlling weeds? I'd love to hear from you!
Posted by Keowdie at 8:35 AM