The Tale of Squirrel Nutkin

Tyson brought home a new book from school last week. It is called "The Tale of Squirrel Nutkin," by Beatrix Potter. It's part of a new springtime literacy unit in his first grade class. 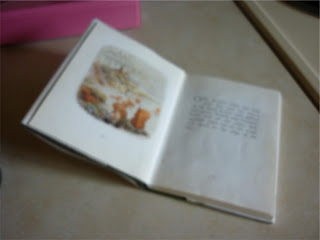 Now, I know this will shock you, but I am not all that familiar with Beatrix Potter's work. I know she wrote in the early 1900's, and I think we maybe read "The Tale of Peter Rabbit" when I was in elementary school (probably around Easter time... when the word "Easter" was still allowed to be uttered in public schools), but that's it. I knew she wrote a series of tales about cute woodland creatures, but I never read any of them. Until this Nutkin character came into our home and stirred up some discussion.

The book has quite a few pages, with quite a few words. Tyson has some... difficulty in school, and it's definitely too long for him. Plus, some of the words aren't American-English as much as they are British-English, so we have to keep stopping to explain what those words mean. Tyson is definitely not crazy about this assignment, so it's controversial for that reason.

But there is another reason it's a bit on the controversial side as far as Matt & I are concerned. Have you read this story?

Well, it starts by introducing the squirrels, who live in the woods at the edge of a lake. In the middle of the lake is an island that is just loaded with trees and nut bushes, so the island is to these squirrels what Death by Chocolate is to me. They make little squirrel-sized rafts and sail across the lake to the island.

I know. "Wow," you're thinking at this point. "This is such a hugely controversial story. Squirrels. Building rafts. Yikes."

Hold on... I'm getting to the questionable part.

Are you ready? Because here is where I start to think this story maybe isn't so cool.

The squirrels bring offerings to the owl. Offerings in the form of mice and fat moles, among other things. Offerings to appease the owl. So he will let them gather nuts from the island.

They reverently gather in a semi-circle around the owl who sits in his doorway. And they place three mice on the stone at his feet. And he takes the mice inside and the squirrels gather nuts and go home.

And this happens for six days.

And where is Nutkin in all this? Well, he's a very rude little squirrel who, if you ask me, needs to have his back porch turned red. If ya know what I'm saying.

He does not treat the owl with reverence or respect. He skitters around singing weird songs and asking riddles (which are ignored by the owl). Nutkin gets progressively worse each day, until the last day when he jumps onto the owl's head. The owl grabs him and sticks him in his waistcoat pocket. Then he takes him inside, holding him by his tail to "skin him," but Nutkin pulls so hard that his tale breaks in two and the little stinker gets away.

And how does the story end? Does Nutkin learn his lesson? Does he repent or apologize or teach the younger squirrels about proper manners?

The book ends by telling us that to this day, if anyone asks Nutkin a riddle, he will turn around and have a little temper tantrum and bark at the animal asking the riddle.

"The Tale of Squirrel Nutkin" is a tail of animal sacrifice, idolatry and a little squirrel with no manners, who ends up with post traumatic stress and rage issues.

Yes, these are just the underlying theme of the book. But we are diligent parents, and are concerned with those subtle, underlying messages that sneak in under the radar.

Thank goodness Tyson doesn't really like this book... he doesn't really pay attention to what is being read. He just wants to get through it, and in this instance I'm okay with that.

Have you read the Tale of Squirrel Nutkin?" What did you think of it? 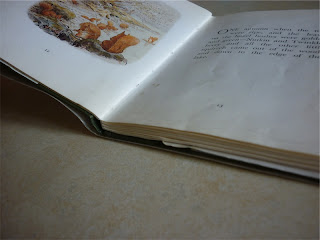