Hi, Ya'll! It's Friday, and I have just a couple of quick things to share.

If you're a knitter, be sure to stop by my other blog to check out photos of my new FO (Finished Object). I did some fingerless mitts that turned out great. Also, I'm looking for some advice on making these lovely wool mitts less like a torture device scratchy. So if anyone has any ideas, I am completely open to hearing them!
~~~~~~~~~~~~~~~~~~~~~~~~
I'm still reading along through the Bible in 90 Days. I have left the OT behind. It's nice to be out of there. I mean, don't get me wrong, I know there is really important stuff in the Old Testament. But the end of it is just such a downer. Also, if it was a movie, it would be rated R for violent content. I have to admit that I was a little uncomfortable with reading so much about God's anger toward Isreal and the nations... and what he did to Jerusalem. I wasn't raised with those stories, or with that "side" of God. I mean, He definitely gave them chance after chance after chance... and I just think that if I had seen all those miracles and wonders that He did I would have been a little more devout in my faith. I am still confused about why His chosen people just couldn't seem to get it together and keep it together. I mean, I know that they couldn't keep the Law absolutely. The broken and sinful nature of man would never allow that. (Plus, it was a lot of rules to remember.) But, really. I do not have any idea how it is that after they witnessed the plagues and were delivered out of Egypt, that first generation went off & made a golden idol just because Moses was gone a little longer than they expected.

And later, when Jeremiah (now I know why they call him the Weeping Prophet) was telling them about the destruction and all the death and disease that would come to them.... I don't understand why they didn't get it together. He was pretty clear and explicit in his prophesies.

Now I'm in the book of Mark, and the reading is flying by. Although I have read bits & pieces of the new Testament, I've never actually read it through. The religious group I was raised in had its favorite verses, and pretty well stuck to them exclusively. But really, is there anything better than reading the Gospel? I mean, I can't put it down! I love reading all those red words, and I think I got all teary eyed about 23 times in Matthew. Jesus is just so awesome! (Yes, I'm a dork --> Goooo Jesus!!!! *Does a hurky*) A few of His parables have confused me, but He usually explained them, so I usually figure it out. I've still got a few question marks, but I'm trying not to get hung up on them.
*Don't know what a "hurky" is? You could ask Smockity. She sent me a great picture of one!*
~~~~~~~~~~~~~~~~~~~~~~~
We had a sick little boy this week. I got to take off work on Wednesday to take care of him. I was bummed that he was sick, but it was really nice to spend the whole day with my "baby." He spent the entire day snuggling me, Nani-Bear and his "Foofy." Doesn't he look so pitiful? 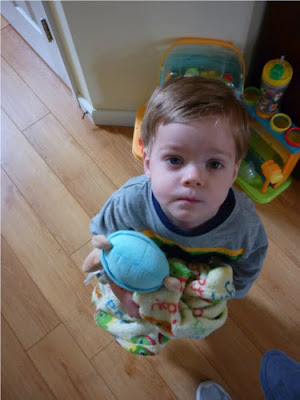 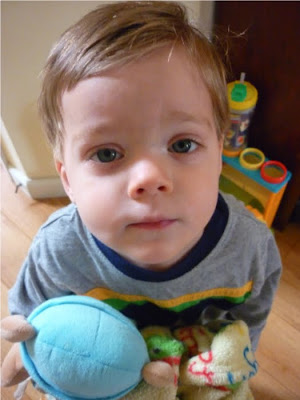 He's better now, and back to tearing up life (and my house) at breakneck speed!
Posted by Keowdie at 7:16 PM